Werner & Pfleider are one of the worldwide leaders in manufacturing mixers for intelligent solutions in dough production and Mixing processing. Don’t let repairs and failed equipment slow you down, Mixerworks backs all their rebuilds with a 6 month guarantee.
Get A quote
or
Call Us 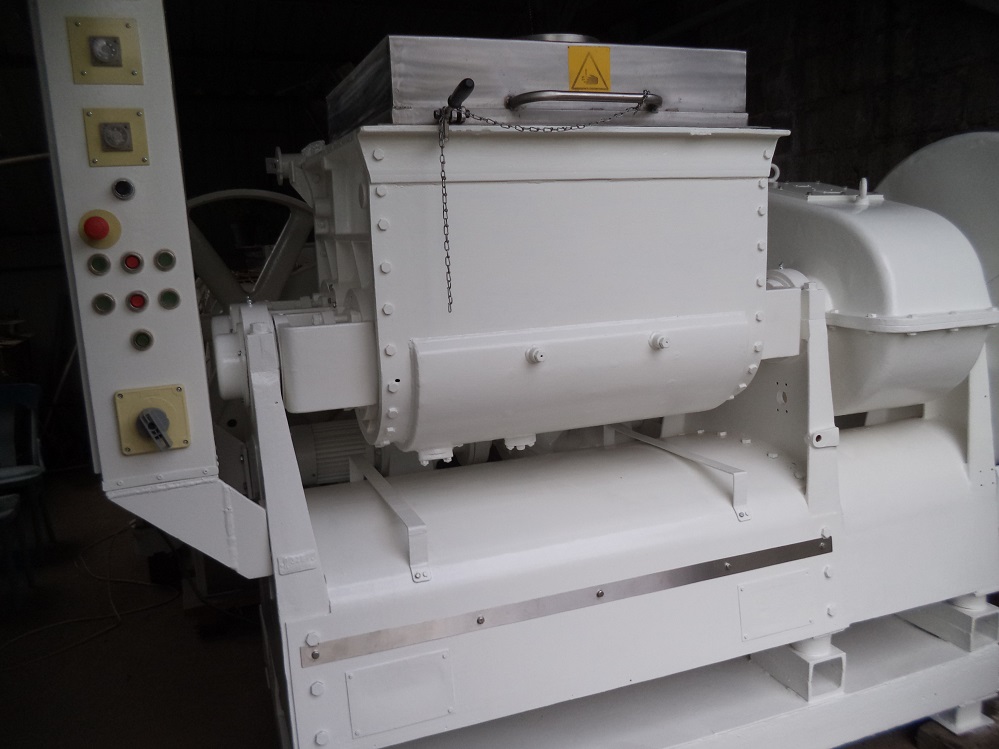 MixerWorks’ dedicated Repair & Modernization Team can bring your Werner & Pfleiderer Mixer equipment back to life and meet or exceed OEM standards. Our technicians will conduct point-by-point inspections, equipment rebuilds, upgrades, and much more to increase the reliability, performance, and longevity of your existing mixing equipment. We serve many manufacturer brands and our goal is to maximize the performance of your mixer through targeted repair and upgrading. You can count on MixerWorks for your Werner Pfleiderer Mixer Repair.

The Mixer Company only uses the highest quality parts on your Werner & Pfleiderer Mixer rebuild and provides warranty options that are unsurpassed by any other company.

To optimize your production process, we can perform an on-site inspection of your mixing facility and deliver detailed inspection reports with repair and/or parts recommendations. We can help REDUCE downtime. With  a combined experience of 200 years, our personnel can map your preventative maintenance program for the years to come, and lower your total cost of ownership.

Free Pick Up and Inspection

We offer free pickupand inspection of your mixer. We can get a truck to you within 24 hours, and in many cases the same day, thanks to our two convenient locations. We’re able to accomplish this via our well-established national trucking network. If you are satisfied with the terms of the quote we will waive the shipping costs. If not, you would just pay for  return shipping.

Why Choose The Mixer Company For Werner & Pfleiderer Mixer Repair and Rebuilding Services?

An unexpected Werner & Pfleiderer Mixer failure can result in costly downtime, affecting several operations at your facility. When your process stops, money is literally flying out the window. We can help you overcome these critical situations by restoring your Werner & Pfleiderer Mixer to be fully operational again, affordably, and in a fraction of the time OEM’s quote,  which typically take 9-12 months! Our factories are equipped with state of the art inspection and repair equipment to handle any Industrial Mixer.

Over the years, we have replaced and fabricated thousands of hard to find Werner & Pfleiderer mixer parts. If we don’t have the part you are looking for, or it’s no longer made, we will fabricate it to meet or exceed OEM requirements. We’ve had machines from companies that were built over 70 years ago that require parts that just don’t exist anymore.  Since the 1930’s, we have made parts for companies like 3M, Dow, and Hershey’s just to name a few. You can rely on MixerWorks to make the correct part.

We have replaced, repaired and fabricated a plethora of Sigma Blades, Single Blades, Choppers, Paddles and more. Call us today for more info.

We can replace, rebuild or fabricate any extruder part including the screws, shafts & barrels. Just Give us a Call.

We fabricate all of our gears in-house to your custom specification or to OEM specs. Either way you will get a precision product backed by our 12 month guarantee.

We can fabricate custom shafts or reverse engineer your existing broken shafts.

What Is Your Next Step?

Schedule a Tour of One of Our Plants by calling our shop.

If you need additional services, check our our  Centrifuge and  Gearbox rebuilding services.

1877 Paul Freyburger from Stuttgart is granted patent no. 1454 for a kneading and mixing machine with two elliptical agitator discs.

1878 Paul Pfleiderer contractually takes over the patent for all time and all countries.

1880 The joint enterprise Werner & Pfleiderer is entered on the Commercial Register of the Cannstatt Local Court. In the beginning, the company makes mixing machines but the market and army provision offices soon start demanding complete systems for making rusk. Pfleiderer initially buys the necessary dough rollers, cutting machines and ovens from England. Soon afterward the company starts making its own.

1889 Establishment of the company’s own production works in Vienna.

1890 Around the turn of the century, Werner & Pfleiderer has subsidiaries in London, Paris, Vienna, Moscow, and Saginaw (Michigan, USA).

1893 The company Werner, Pfleiderer & Perkins Ltd. is established in London. Perkins supplies the special steam pipes for ovens production. The works in Cannstatt has the suffix “CannstattSteam Baking Oven Factory” added to its trading name. At the same time, Werner adds ribbon proving cabinets and taper round-molders to the production range. The clientèle includes not only customers in the food industry but also chemical, paint and explosives manufacturers.

1905 Richard Werner enters his father’s company as a partner.

1908 Otto Werner enters his father’s company as a partner.

1910
WP produces rubber washers, rubber kneaders and drying ovens for the rubber industry. Lehmann, the leading company in the field up to this point, is taken over.

1912 WP Vienna, which by this time also builds aircraft and aircraft engines, splits from Warchalovsky again so that” their specialties are not pushed out by orders for the

military”, according to the then managing director in Vienna, Otto Werner.

1910-1914 WP develops the Vienna mixing machine, which is the first to be driven by an electric motor. The first continuously operating suspension oven called the”AutoOven” by WP, bakes as many as 10,000 rolls an hour.

1914 Production is given over to war requirements, i.e. field bakeries. Richard and Otto Werner join up as volunteers.

1918 The company has lost 74 employees in the war. The plants in Britain and the USA are compulsorily expropriated. The British firm Joseph Baker & Sons buys the subsidiary in Saginaw and the British subsidiary, Werner, Pfleiderer & Perkins, and forms Baker Perkins Ltd. Numerous foreign branches have to be closed. The major part of the sales market is lost.

1921
An agreement known as the”CredoTreaty” is signed with Baker Perkins. It is a general contract covering market and product development. WP makes the first ovens to be constructed in steel rather than brick-built.

1927 WP suffers a financial crisis. To consolidate, the company is restructured and changed into a limited partnership.

1929 Otto Fahr successfully fights for compensation for the Saginaw plant.

1931 Otto Fahr becomes chairman of the board and, at the same time, silent partner, and eventually general partner in 1951.

1934 The Depression has not spared Werner & Pfleiderer. The number of employees has shrunk from 1,350 in 1929 to 55 and sales revenue has plummeted from 16 million to 5 million marks.

1938 The four-year plan of the National Socialist government invests in the use of synthetic rubber. Werner & Pfleiderer is involved in making the necessary machinery.

1938 Zyklotherm heating is introduced into baking oven design. It involves a central gas or oil-fired heater that produces hot air as the heat conduction medium, which is then controllably directed via channels around the baking or drying chamber. This enables precise temperature regulation. It also reduces operating costs.

1938 A new plant and office building are erected in Feuerbach near Stuttgart.

1939 The company makes machines for field bakeries, supplies mixers for explosives, artificial silk and rubber, and manufactures parts for artillery weapons, aircraft and rocket tail units(for the V II). The proportion of arms-related production is less than 20 %. Many former employees are at the frontline. In their place, so-called”foreign workers” are employed.

1944 The factory in Feuerbach is largely destroyed by air attacks. The company is occupied by the French Army in April 1945.

1945-1949 WP survives on the repair and replacement needs of customers. The majority of the management is removed from the company by the denazification process.

1949 Otto Fahr takes over the reins of the company again and his eventual successor, Helmut Steinmann, joins the business. Even though synthetic rubber production in Germany has to be shut down, WP’s business with the chemical, plastics and rubber industries is booming. The plasticizer for PVC production is invented and establishes itself as the standard.

1953 The first Matador oven is delivered. The MATADORremains the most successful deck baking oven on the market to this day.

1957 Separation of lines of businesses: the plastics division is split off as an independent operation headed by Günther Fahr.

1964 Production of the MATADOR moves from Stuttgart-Feuerbach to Dinkelsbühl in Bavaria. The plot and buildings previously used as a sawmill are put to new use and reorganized in the years that follow, and finally replaced by new production halls and a new office building. New staff is recruited through newspaper, poster and cinema advertising and trained at company headquarters in Feuerbach.

1973 The WP Group’s entire oven production is based in Dinkelsbühl.

1979  Production of machinery for artisan bakeries moves to Dinkelsbühl.

We are not the Werner & Pfleiderer Mixer OEM, however  we do service their products. 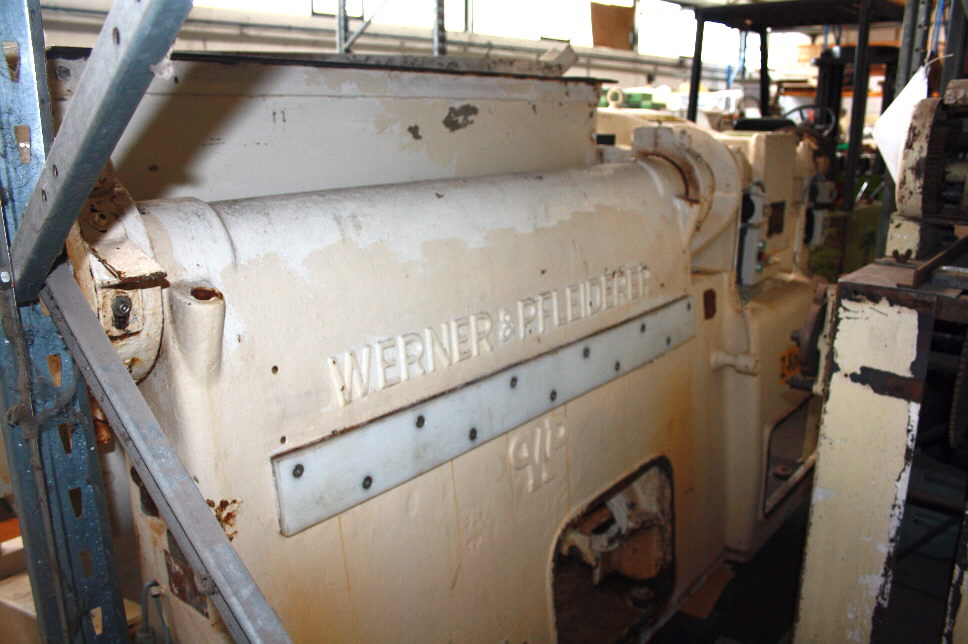